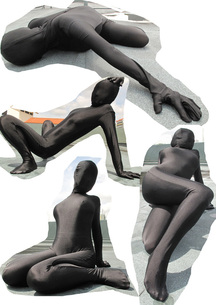 Reflections on zentai
​
By Yuzuru Maeda and Jon Schweer
Zentai (ゼ ンタイ) is a term for skintight garments that cover the entire body. The word derives from the Japanese term zenshin taitsu (全身タイツ), which literary translates as ‘full body tights’.

Zentai is most commonly made of Lycra. Lycra technology was invented in the 1970s by DuPont, an American chemical company. In Japan, Lycra was first manufactured by Toray Industries, a company that specializes in industrial products made using organic synthetic chemistry, polymer chemistry and biochemistry. Lycra is very stretchable and easily follows the contours of the body, giving it an appearance of oppressive tightness and restraint. These qualities somewhat paradoxically enable free, easy, and unrestricted movement for those wearing the material
Zentai can serve as a proxy for human skin. It can have an alien or ethereal look. Unlike latex suits developed in the West, zentai is made from one piece of fabric and covers the entire body. It presents the nakedness of the body without actually exposing any part of it. Colours of zentai suits cover the entire spectrum of the rainbow, from dark tones to bright, neon colours. Common colour combinations and patterns include camouflage print, spirals, two-tone and binary prints.
Zentai—also marketed under the brand Morphsuits and Superfan Suits, among others—are used as costumes for iconic characters at major sports events. Some internationally recognized personalities and wearers of zentai are The Green Men, known as Force (Adam Forsyth) and Sully (Ryan Sullivan). Force and Sully are two fans of the Vancouver Canucks, a Canadian professional ice hockey team. They are known for sitting beside the opposing team's penalty box during Canucks games at the Rogers Arena. Force wears a neon green suit while Sully, the shorter of the two, wears a darker suit.
The use of zentai suits in superhero lore also has a practical aspect. A key example is the superhero Spider-Man, who wears a unique red and blue zentai costume. Like most creatures in nature, his zentai uses colour as a means of identification. It signals ‘I am here’, and symbolically represents the idea that ‘with great power comes great responsibility’. Another heroine, White Tiger, dresses in a white zentai that has several light grey markings. Her costume formally represents the idea of a totem. It also symbolizes the animal’s strength, power and ferocity.
Aside from hiding their personal identities, wearing zentai also enables superheroes unrestricted freedom of movement, which is crucial for them to perform extraordinary physical feats.
In the 1980s Marcy Anarchy started to experiment with full body tights. His experiments were inspired by Ningen Modoki, a character from the manga series Maguma taishi (1966–67). It was during this time that the full body suit was developed. The image of combatants wearing zentai in series such as these made a strong impression on early admirers of the suit. These images were also often their first encounter with more fetishistic aspects of zentai. In particular, the combatants in Magma taishi (マグマ大使) and Himitsu Sentai Gorenjer (秘密戦隊ゴーレンジャー) are notable for their use of zentai. Similarly, the Japanese amateur performance television show Kasou Taishou (欽ちゃんの仮装大賞) also features competitors wearing zentai.
There are several sexual aspects to zentai. One example is be the gimp suit, which was featured in the film Pulp fiction (1994) by Quentin Tarantino. The gimp suit can be made from several different materials, such as leather, PVC, rubber, Darlexx and Spandex.
The zentai suit’s sexual connotations are not straightforward. In some situations, wearing zentai can free the wearer from social norms and taboos, allowing them to transcend cultural restrictions and feel more closely connected to the universe. On the other hand, this same reduction of a sense of self can render the wearer de-personified and inanimate, an object to be used by others.

People who desire to cover or objectify their bodies often enjoy wearing zentai. Latex cannot achieve the goal of covering the whole body, due to its inability to let air in and out for breathing (full-body suits made of latex require a hole for the mouth and/or nose). Wearers of zentai who wish to control or limit breathing may take a shower or spread lotion on the inner fabric.
Zentai raises questions about human identity because it covers the face, the part of the human body that is usually used to identify people. This aspect of zentai raises the question ‘who am I?’ Zentai transcends man-made rules, and removes limitations on identity, particularly psychological ones. It can counter many of the social taboos in relationships between individuals. Under a zentai suit, concepts such as age, gender and surface beauty are removed. The mind wants to label, categorize and analyze whatever it experiences. But that is far from the experience of wearing zentai. A person wearing zentai by contrast translates experience through the senses, and emotion through bodily language.
People spend a lot of energy physically and psychologically on how they look. They spend time trying to look unique, different, decent, or proper, depending on what they are trying to communicate. Individuals make sure that they smile politely in order not to offend others, or in the hope of making other people like them. Inside a zentai suit, these types of concerns seem muted.
Because zentai reduces the senses, the wearer is more sensitive to what is on the inside than what is on the outside, allowing them to be meditative. It encourages them to be more conscious, aware and in touch with themselves.
Inside zentai, individuals are not separate from one another. Every individual is part of the same universal whole. Things that define a person’s sense of identity, such as ‘my hair’, ‘my skin’, ‘my thoughts’ or ‘my clothes’, just complicate things.
Wearing zentai appears to link with some aspects of Buddhism. One of the underlying themes in Buddhism is the removal of the ego and rising above worldly concerns, partly though meditation, in order to achieve a state of pure intellect.
It creates a different form of communication because of its:
1. Facelessness, which relates to a loss of identity or the assumption of a new one
2. Limitation of sight
3. Reduction of sound, both heard and spoken
4. Reduction in a sense of smell.

The restriction of these senses force wearers to find alternative forms of communication, such as gesture and touch.  Because there is no face to identify the individual, they no longer need to introduce their names, addresses, types of work, etc. One can simply be an anonymous zentai suit, and introduce themself as ‘the black one’.
Wearing zentai raises the question of whether we really need identities and introductions in order to establish human communication. In this way, wearing zentai is reminiscent of childhood, when children encounter one another and start playing, without any concern or prejudice. Do we need to identify a stranger in order to understand if the person is of use or gain to us
But human nature is to be happy together.  Once we start to recognize one another’s differences, unhappiness creeps in, because we start to judge, like and dislike. A sense of identity is what divides us. (texts with support of Institute of contemporary arts Singapore) 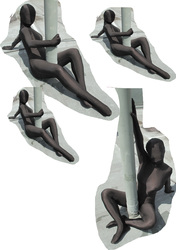 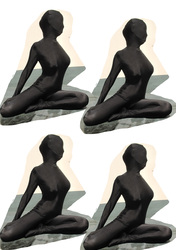 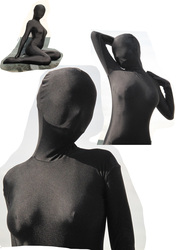 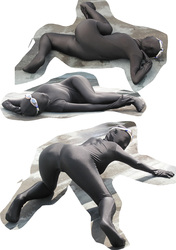 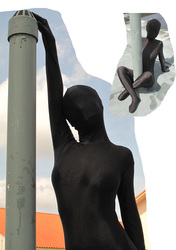 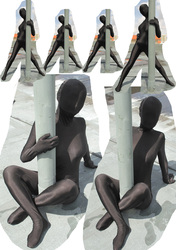 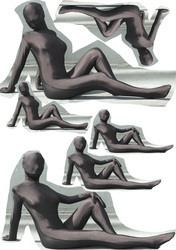 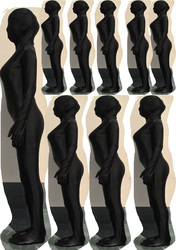 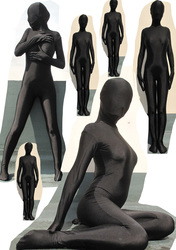 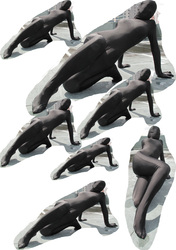 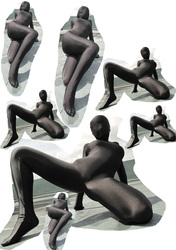 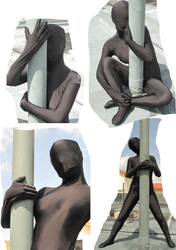 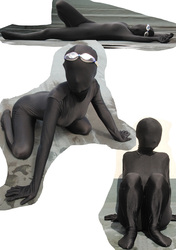 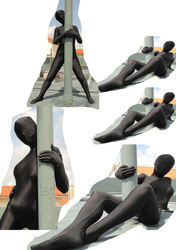 Zentai is a skin-tight garment in Japanese. My first contact with Zentai was during my years in junior high school. There was a midnight program called 'Tamori Club' on the television.  They featured Zentai fetishism in Tokyo. There were 2 men and 2 women wearing Zentai suits and rubbing each other with their body parts. I don't think they were partners related in love relations but perhaps condescending individuals interested about Zentai culture and their enthusiasm could make them feel freer to connect with each other. This image stayed strongly in me for a long time.

For me, Zentai can take away rules and limitation psychologically and physically. It can take away the social taboos in relationships between individuals, in this sense, under a Zentai suit, age, gender and surface beauty becomes neutralized and hence rendering it non-identical for me. Zentai is a combined medium where I can make videos and compose music to talk about different ideas through one theme. Zentai is my present process to bring about the idea of Unity (between individuals).  There is no difference in any persons and we are all living this cycle of life.  We are all passenger of this spaceship earth.