The world is getting more and more materialistic. People say the world will not last long if we continue to consume the way we do now.

But I think we don’t need to look for a new invention that can save the world. I believe the key is to have fewer desires or identities.  If we could live simply, and require less materially, the world could sustain its cycle.


When I see a group of people wearing zentai, I can identify female or male but nothing more. And maybe this is enough.

We could live just as male or female but now we are playing too many roles in society, like nationality, age, job, education, family and so on.

I think zentai can remind us that it is good to be ourselves, the self that exists beyond identities.

A group of zentai people look like they are merging into one another as if they are one whole energy.  Zentai not only takes away the identity but also the individuality. It is no longer 20 people standing together but one big energy standing.

And I think this is what we really are.  We are not separate from each other.  We are actually just one energy. What makes us think we are different from other person is the 'identity'.  Identifying 'my' hair, 'my' skin, and 'my' thought, which makes everything complicated.


So zentai reminds me to be a simple being.

And this simplicity touches the heart and the core of Human beings.

----
I have been making video-based music works called Zentai Art Project. These video works are visual explorations that are extended from her practice as a contemporary musician. In the Art Project, the artist uses the Japanese sub-culture to investigate into the human conditions of identity, spiritual connections with cosmic energy in the universe and as a means to come to terms with one’s living environment.

In my Art Project video works, I am trying visualise my inspirations and expressing it in the video frames. My generic theme for the project is about ‘Who am I’ and ‘What is the truth and reality’. By taking a close look at small details of everyday life through camera, I expand my perception to the world.

While creating my own aesthetic voice and focusing on sound and video of my work, I aim to allow the viewers to peer into themselves that is newly discovered. By displaying personal illusion of images and discovering the meaning of colors, I intend to question the meaning of materials that we can see, hear, sense, feel vs. something beyond our 5 senses. I continue to work in the super reality, which exist but not yet to be seen, and wish to create a new series regarding to project the new reality to be discovered yet.

Zentai often questions about human identity because it covers the face, which is the most significant identification of the human body. It helps to question ‘who we are?’. Zentai transcends manmade-rules and limitation psychologically and physically. It can take away the social taboos in relationships between individuals. Under a Zentai suit, age, gender and surface beauty becomes neutralized and hence rendering it non-identical. This project attempts to investigate into human expressions, memories and social coherence in the context of the urban living conditions in Singapore. It will present many different realities and perspectives about life spiritually and beyond.

I think the identification to the self sets a limitation.

When we meet new people, they will maybe tell us a lot about themselves. Born in Mexico, 45 years old, teaching mathematics in the school, open minded, easy-going, nature loving, likes the children, doesn’t like the white beer but loves the black beer…

Identifying self to the nation, job or personal character, is a mental labeling.  It has got nothing to do with who we are, because all these labels and names are subject to change. One will retire the job, change the personal character by the age or situation and the liking of the beer changes when a red beer is introduced. So the labeling of the parson does not describes who they are.

To identify the self, give a name and conditions, it sets a limitation. The mind is scared to not to have the identity, the self-image that forms the pattern of behavior.  If one identifies oneself as a policeman, it leads one to play the role of the policeman. The society wants everyone to play the certain role.  A child needs to behave like a child; musician behaves like a musician, and so on.


So how do we know who we are? It lies in the silence between the words. Where things are unconditional.

I projected the connection between the people and the place.  In the video, pink zentai figure is prostrated to the river of Ganges in Vanarashi, India.  When I shot this scene, it was morning of 11th March 2011, same time when the earthquake hit the Tokoku area of Japan. It was a quiet and special morning on the boat.

When I went to the Tohoku area later in the year, the melody of this video came to my head. I wrote it down and made a recording of it. I combined these two elements, despite of the distance, Ganges and Tohoku, I find connection between the two places. The pink zentai is a symbol of identity that goes beyond the time and space.  It can be here; it can be anywhere and yet nowhere.

In this video, I experimented the change of the figure.

The zentai figure inserts the balls to its body to deform the body shape.

The form is subject to change.  Any form such as body shape, materials, living environment or relationships changes.  It all comes and goes, it is not a subject to be identifying the self with.

The balls are elements of these temporary things that come into the life for sometimes. Anger comes into my life for sometime but it eventually leaves me alone.  So the anger is not a subject to be identifying with, as I am not anger, I am something behind that watches the anger.

In this video work, I explore the movement.  Zentai is dancing with the environmental sound. When one listens to the sound so closely, and carefully, the act puts one into the present moment. By fully be in the moment, the individuality slowly dissolves. There’s no emotion or thoughts that attach or deny to what happens.  It is about the confirmation to the ‘now’.

When the mind is in tune with the moment, the identification of the self expands from the single body to the limitless space.  Body is no longer the tool to inform the individuality. 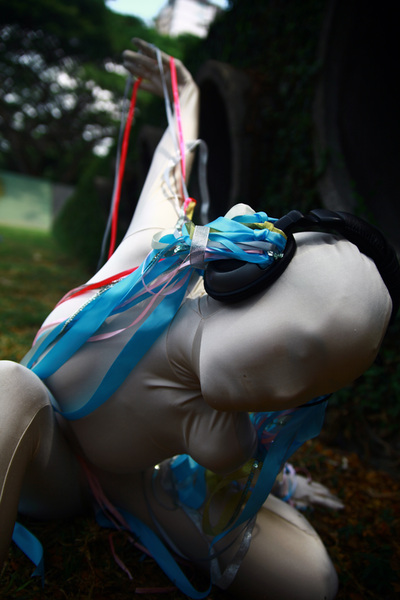 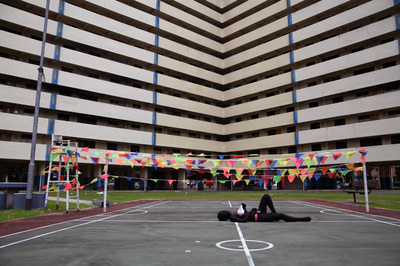 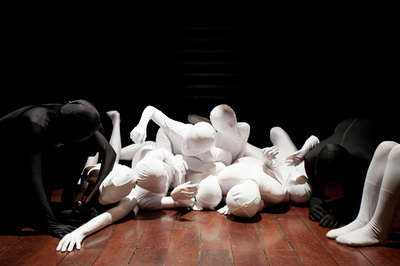 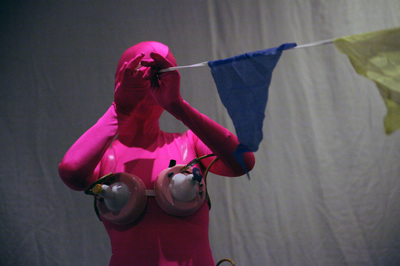 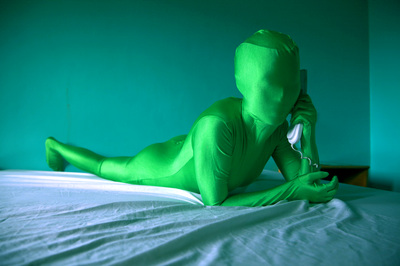 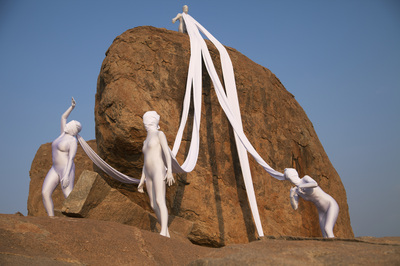 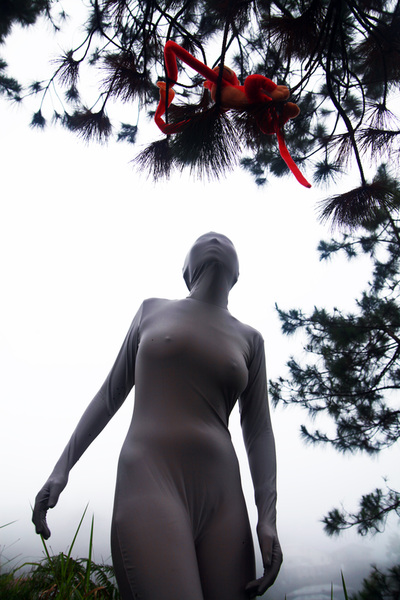 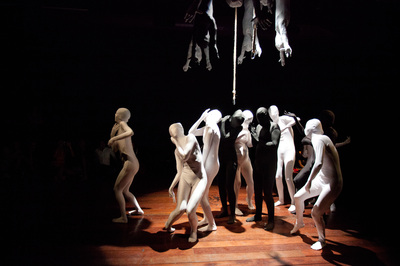 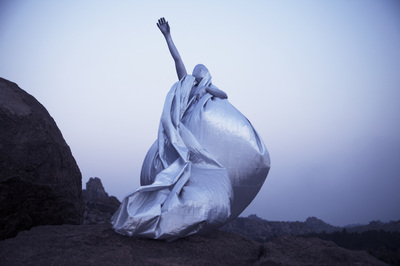 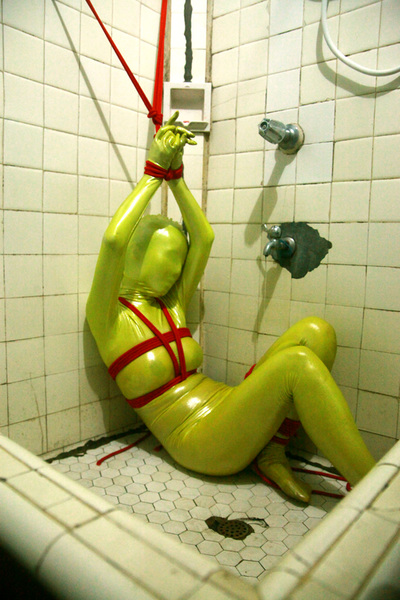 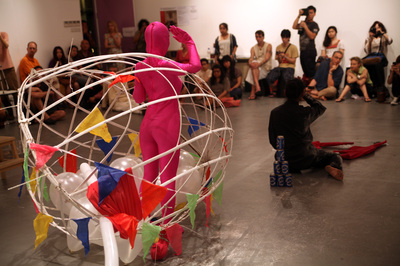 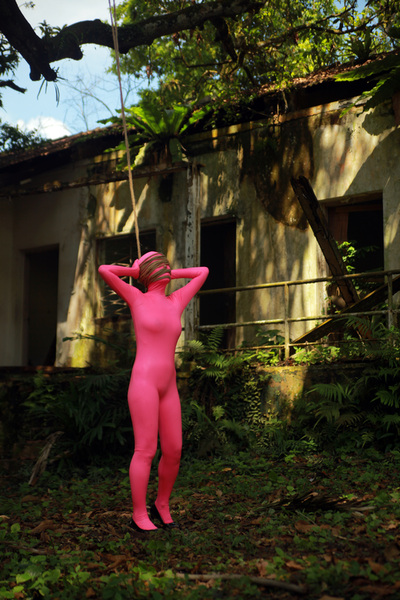 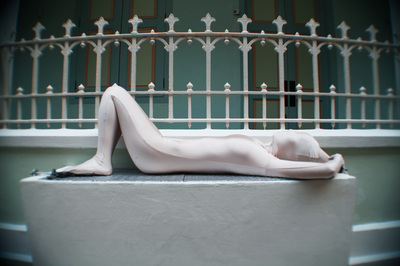 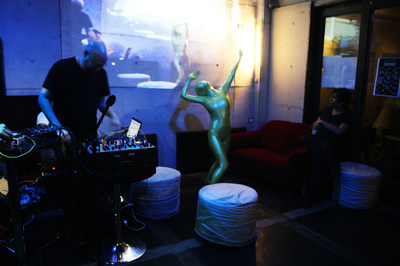 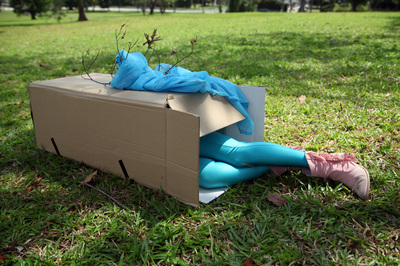 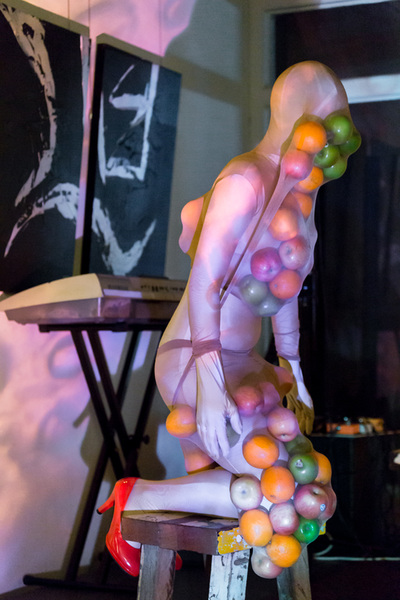