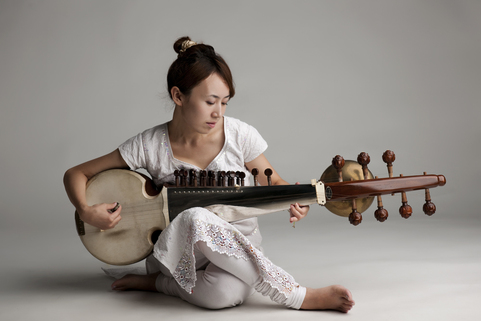 Yuzuru Maeda is born in Ogaki, Japan in 1978.
She had received a BA from the LaSalle Collage of Arts, Singapore in 2009 and currently lives in Singapore.She has been involved with producing soundtracks, jingles and music compositions for independent films and video works.She performs with Sanshin (Japanese), Sarod (Indian) at different venues.

1. Artist’s Biography
Yuzuru Maeda (b. 1978, Ogaki, Japan) received her Music BA from LASALLE College of the Arts, Singapore in 2009 and currently lives in Singapore.
Yuzuru has been making video-based music works with ‘Zentai Art Project’(yuzuru.weebly.com). These are visual explorations extended from her practice as a contemporary musician. In her art projects Yuzuru uses Zentai, the Japanese sub-culture to investigate the human conditions of identity, spiritual connections with cosmic energy in the universe and as a means to come to terms with one’s living environment.
She currently organizes Zentai Art Festival (zentaiart.com) in Singapore and around Asia.

2008
Diploma in Music
LASALLE College of the Arts, Singapore


May 2011
Bangkok Art and Cultural Center, Thailand
‘The Mekong River: Co-River 2’, a series of events and exhitbitions based on artist-field trips and on-site works, “Where Would You Place Them?”

8 May 2014
The Substation, Singapore
Why then, should we worry?

5 December 2013
The Substation, Singapore
Why then, Should we worry?

18 May 2012
Rooted In The Ephemeral Speak, The Substation, Singapore
Video and sound performance

9 May 2011
Bangkok Art and Cultural Center, Thailand
Performance and exhibition in ‘The Mekong River: Co-River 2’, a series of events and exhitbitions based on artist-field trips and on-site works, “Where Would You Place Them?” artists exchange project, Thailand


2. Artist Statement:
The world is getting more and more materialistic. People say the world will not last long if we continue to consume the way we do now.
But I think we don’t need to look for a new invention that can save the world. I believe the key is to have fewer desires or identities.  If we could live simply, and require less materially, the world could sustain its cycle.
When I see a group of people wearing zentai, I can identify female or male but nothing more. And maybe this is enough.
We could live just as male or female but now we are playing too many roles in society, like nationality, age, job, education, family and so on.
I think zentai can remind us that it is good to be ourselves, the self that exists beyond identities.
A group of zentai people look like they are merging into one another as if they are one whole energy.  Zentai not only takes away the identity but also the individuality. It is no longer 20 people standing together but one big energy standing.
And I think this is what we really are.  We are not separate from each other.  We are actually just one energy. What makes us think we are different from other person is the 'identity'.  Identifying 'my' hair, 'my' skin, and 'my' thought, which makes everything complicated.
So zentai reminds me to be a simple being.
And this simplicity touches the heart and the core of Human beings.